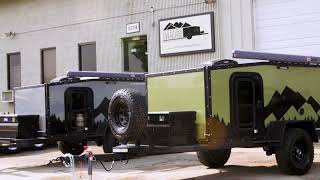 Into the Wild Overland: A Video Success Story

"Our company has been working with LLP for multiple shoots. They take the time to learn about your business and the people involved." -Matt Reichel We met Matt a few years ago when we filmed him for an Accuride testimonial about his custom campers. (Matt used Accuride's product and they wanted to film him for their social media, so Accuride called us.) Our original video was made for Accuride, but Matt was interested in what we were creating. After we explained the benefits o
40 views0 comments

Camping with Into the Wild Overland

We were hired by the lovely folks at Accuride to film testimonials and grab some photos for their latest video. Accuride makes high end sliders for cabinets and drawers that can manage heavy weight. And Into the Wild Overland is one of Accuride's many customers who uses the sliders in their campers. Because Accuride's headquarters aren't in Colorado, they hired us to film Matt, Into the Wild Overland's owner and founder. We frequently shoot for out of town companies and send
42 views0 comments
bottom of page